Christians and Forgiveness of Severe Offences

How Should Christians consider forgiveness when dealing with the most severe of offences imaginable? This question of how to face severe offences can be considered  from complementary angles: to whom does forgiveness benefit? forgiveness considered as a choice; forgiveness as a refusal to avenge oneself; the forgiveness offered by God to the worst offenders; Christ’s sacrifice for our forgiveness and that of others.

1. Forgiveness benefits the offended, not just the ofender

People from all sides would agree on this with what Christians have been saying for a long time. Forgiveness not only benefit to the offender, but also to the offended. When you have been sinned against with a great evil, forgiving the offender frees you. It allows you to love again, to trust again, to live again, without keeping to yourself.

2. Forgiveness is a choice

When we stop to think about it, everything we do or don’t do in life is the result of a personal choice. It is a lie to think that because so and so did such and such we have no choice to react in any socially predictable manner. «He struck me so I had no choice to strike back» is a lie that only leads to being enslaved to circumstances and people.

Some choices are difficult to make, and they certainly don’t feel natural. Forgiving falls in that category. Someone compared the choice of forgiving to a monk’s poverty vow. You make your choice once, when you join the brotherhood, and you renew it daily. Forgiveness is of that nature. We need to decide that we do forgive Amanda or Freddy for what they have done to me. The fact of having forgiven them does not mean that you don’t need to reiterate this forgiveness, for example when the pain is there again.

3. Forgiveness as a refusal to avenge oneself

Now, those of us who define ourselves as Christians should not consider it Jesus’s wish list that we would forgive one another our offences or even the offences of our enemies. These are part of the Christian’s marching orders, that we forgive not only the minor irritants caused by our interacting with others, but also severe offences from anyone. Let us review a synthesis of Jesus’ teaching presented by the apostle Paul in what is quite a systematic presentation of the Christian faith found in the Bible, the book of Romans. Towards the end of that book, we can read what follows:

Repay no one evil for evil. Respect what is honorable in the sight of all men. If it is possible, as much as it is up to you, be at peace with all men. Don’t seek revenge yourselves, beloved, but give place to God’s wrath. For it is written, “Vengeance belongs to me; I will repay, says the Lord.” Therefore “If your enemy is hungry, feed him. If he is thirsty, give him a drink; for in doing so, you will heap coals of fire on his head.” Don’t be overcome by evil, but overcome evil with good (Romans 12: 17-21, WEB).

One of the things it means to truly forgive is that we do refuse to avenge ourselves. This Christian attitude can be observed in the lives of Joseph, David, Stephan, and Christ.

4. The forgiveness offered by God to the worst offenders

I have just mentioned David amongst those who refused to avenge themselves for severe offences brought against them. But David, at a later time in his life, became very aware of the fact that he was the recipient of God’s forgiveness.  Here is how David expresses it:

Blessed is the one whose transgression is forgiven, whose sin is covered. Blessed is the man against whom the Lord counts no iniquity, and in whose spirit there is no deceit (Psalm 32.1-2, ESV).

By that time in his life, David had ordered the murder of the husband of a woman he had seduced while the man was fighting on the front. Yet God had forgiven him.

5. Christ’s sacrifice for our forgiveness

Likewise, all of us living today stand before God’s offer of forgiving any severe offences we might have committed. He expects for us to accept this free gift from him to us. He also expects that we will forgive the offences of those who offended us. This forgiveness comes to us through the sacrifice of Jesus Christ on the cross. We may live in a time and culture that makes this very difficult to us to understand.  Still, try to considering the following passages of Scripture in an prayerful attitude before God:

And you were dead in the trespasses and sins in which you once walked, following the course of this world, following the prince of the power of the air, the spirit that is now at work in the sons of disobedience—among whom we all once lived in the passions of our flesh, carrying out the desires of the body and the mind, and were by nature children of wrath, like the rest of mankind.  But God, being rich in mercy, because of the great love with which he loved us, even when we were dead in our trespasses, made us alive together with Christ—by grace you have been saved—and raised us up with him and seated us with him in the heavenly places in Christ Jesus, so that in the coming ages he might show the immeasurable riches of his grace in kindness toward us in Christ Jesus. For by grace you have been saved through faith. And this is not your own doing; it is the gift of God, not a result of works, so that no one may boast. For we are his workmanship, created in Christ Jesus for good works, which God prepared beforehand, that we should walk in them (Ephesians 2.1-10, ESV). 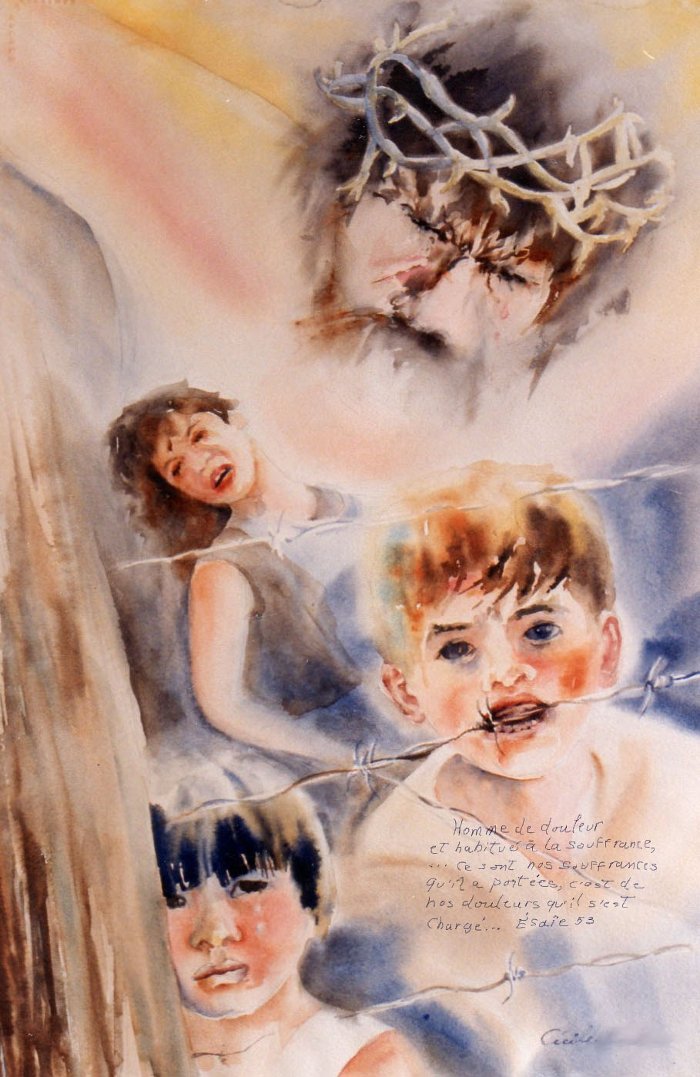 (Photograph of a painting from Cécile Beaulieu, used with permission)

You don’t quite understand the above quote? Ask God to help you through it. Pray as your read! Talk it over with God assuming that He has the Power and Interest to listen. Also you may want to read some of the personal testimonies and articles of this web site dealing with various aspects of my own conversion or sometimes that of others. These may help provide some concreteness to what God wants to do for yourself, dear reader:

The French version of this article Le chrétien et le pardon d’actes graves provides a more in-depth coverage for most of the five complementary angles we have just surveyed above: to whom does forgiveness benefit? forgiveness considered as a choice; forgiveness as a refusal to avenge oneself; the forgiveness offered by God to the worst offenders; Christ’s sacrifice for our forgiveness and that of others.

I pray that God touches the heart of every person reading this article, from anywhere in the world, and at any time that they happen to be doing so. Please let us know of how God stopped you in your ways and transformed your life through this or other means.

Daniel Garneau, B Th, B Com, MA, is founder of site Savoir et croire .ca. His primary objectives are: encouraging Christians who lost hope in their capacity of living for Christ; fostering a better understanding of what Christianity is about; contributing to the dispelling of prejudices against those who openly identify themselves to Jesus-Christ in their daily lives and who dare talk about it; helping to increase the mutual acceptance between various Christian traditions who continue to hold faithfully to the Word of God.
View all posts by Daniel Garneau →
This entry was posted in Life in the Spirit and tagged Forgiveness, Forgiveness through Christ, God's Forgiveness in Christ, Love. Bookmark the permalink.