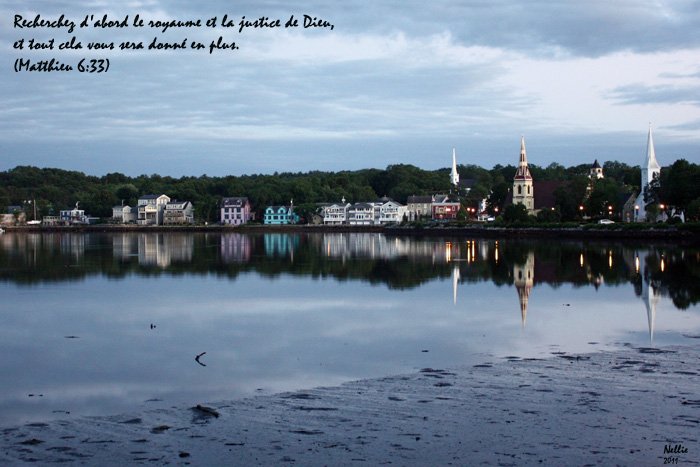 But seek first the kingdom of God and his righteousness (Mt 6:33)

Some aspects of this story is available in Spanish, under Preferencias confesionales, and a variant version in a thread titled Your church on Christian Forums . com, in response to the following questions : “How did you choose the church you currently attend ?” and “What influences your decision making process?” (post # 27 of Your Church) :

[…] This is a huge topic. I’ll just share on some personal aspects of it for now. Circumstances and the people I happened to know have always been very important in leading me to a local Church rather than another. When I chose to turn my life over to Christ, my father had a friend who introduced us to a Baptist Church start-up of 50 who grew up to 500 or so.

Having grown in that Church, and done a Bachelor in Theology (B Th) in seminary, I was eventually mandated by that local Church to start a daughter Church. We grew from 20 or so to somewhere around 50 or 60, including children. But then, situations came up that made me believe I should leave full time Christian ministry. This was a huge decision with important impacts of all sorts, like the need to get secular training…

I wanted to stay in the same Church, but when members came to me because they did not like the orientation taken by the new pastor on practical issues involving how we relate to other denominational groups, I decided to leave that Church for the sake of not interfering with what the leadership wanted, and not dividing that Church.

I was not ready at the time to go back to the mother Church, so my family and I joined a mid size Church that focused part of their meetings on members sharing between themselves about what God did in their lives. The leadership and many members there were from a Christian Brethren background. There were also several from a Baptist background, as well as Christian alliance and non denominational groups. We knew many people, and stayed for several years.

Then I got home-sick, and wanted to go back to my Baptist roots. A new lead pastor seemed to be doing a good job at preaching relevant expository Bible messages. This appeared to be helping the Church move away from some of its most hindering characteristics, and towards maturity and growth in character. It was great to be back with so many old friends, and especially to renew with the visiting pastors or evangelists from the denomination whom I knew from previous years.

We had not been there a year yet when we became aware of this church struggling over leadership issues. At the same time, we realized that our oldest daughter – of college age at the time – did not at all understand some of the features of that Church, which to her seemed “artificial”.

This is when I was approached by the leaders of a non-denominational start-up, former Baptists themselves, to join their group. When they explained their project, I immediately knew it was the right move to do at that time in the context of our family history. So that was 1998. And we have been with that group ever since.

Still on Christian Forums . com, I provided other aspects of this story of mine through insight into what was my nondenominational and local church situation at that time, by responding to a thread titled My First House Church Experience (post # 27):

[…] I just joined this forum, and happen to be a member of a small local Church with 60 or less people in total.

We all meet once a month in rented facilities from an Anglican Church. This is an evangelical gathering with worship, songs, organ, preaching, Sunday School for the youngest, a bit on the formal side, in a nicely historical Anglican architecture setting from past centuries.

But our Church has basically been structured around smaller home Bible study groups. When the groups grow up to a size that makes it unpractical because of our homes, we start a new group or merge some members with an existing group that is getting tiny. About 12 to 15 or so would be a good number for our groups. More than 20 or less than 8 is not ideal. But it all depends upon what is going on in the group, as well as in other groups.

Each home group decides what they do, and when they do it. Our group has two to three discussions a month, and one week a month or so is reserved for informal get-together activity, like a brunch in someone’s home.

When someone goes through something really aweful in his or her life, we sometimes just pray about that situation and do nothing else. Which reminds me that we try to have some of our home gathering focused on just sharing and praying.

Our groups are for the long term. If one of our member has unbelieving friends, we will integrate them to our own group unless we feel they would be better off in one of the othre groups, because of age, or background, for example.

Once a year we have your conventional business meeting where you normally would vote the budget and that sort of things. That’s also a time where we share reports about what is going on within each group, and what other ministries we are involved in as a local Church on a larger scale (i.e. all groups and all people). […]

You wish pursue this conversation by joining Christian Forums . com , where it was originated, or yet in our trilingual Community of dialog about the Christian Faith. Additionally, you may share your response to this post in the comment box below.

You found this article interesting, you might also want to consult:

Daniel Garneau, B Th, B Com, MA, is founder of site Savoir et croire .ca. His primary objectives are: encouraging Christians who lost hope in their capacity of living for Christ; fostering a better understanding of what Christianity is about; contributing to the dispelling of prejudices against those who openly identify themselves to Jesus-Christ in their daily lives and who dare talk about it; helping to increase the mutual acceptance between various Christian traditions who continue to hold faithfully to the Word of God.
View all posts by Daniel Garneau →
This entry was posted in Christian Testimony and tagged Christian Denomination, Denomination, Denominational affiliation, denominational preferences. Bookmark the permalink.