A certain tension is sometimes perceived between the teachings of the apostles James and Paul about faith and works. James says that true faith cannot exist if it is not externalized in any concrete manifestations. Paul insists that it is faith alone that saves without works. 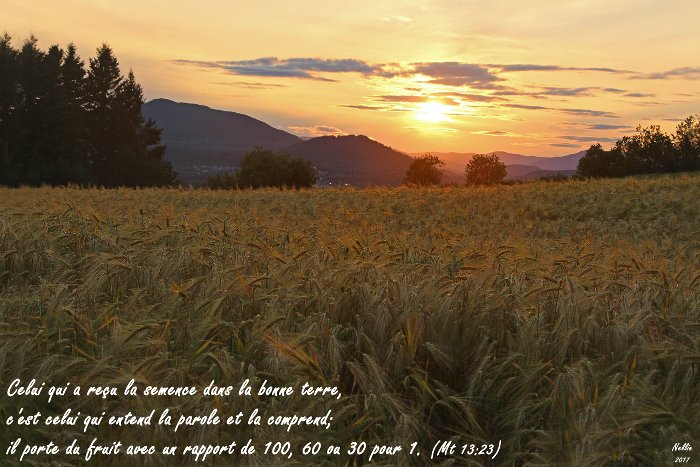 As for what was sown on good soil, this is the one who hears the word and understands it.
He indeed bears fruit and yields, in one case a hundredfold, in another sixty,
and in another thirty. (Matthew 13.23, English Standard Version – ESV)

This apparent tension is elucidated when one understands that the works mentioned by Paul when he teaches about faith without works are those of the ritual and judicial system of the Old Testament. Faith in Jesus alone saves Christians without them having to subject to a system which was in part designed for helping humanity understand the meaning and the extent of Christ’s death on the cross of Calvary.

Paul warned Christians not to seek salvation on the basis of their submission to the judicial system and ritual prescriptions that had shaped the lives of the Nation of Israel. He also advised Christians against the danger of relying upon the works of the law as a source of salvation rather than on Christ alone through the Holy Spirit. This is the context in which Paul says that faith alone saves without works contributing anything at all.

In several places within Paul’s writing, we hear him say the same thing as James about the concrete manifestation of faith in Christ in the lives of those who claim to belong to the Lord. Quoting from the Catholic Edition of the Good News Translation (GNT), let us consider a short sampling of what do in fact say James and then Paul about the relationship between believing and doing :

James 2:14 – “My friends, what good is it for one of you to say that you have faith if your actions do not prove it? Can that faith save you?”

Paul in Galatians 5:25 – “The Spirit has given us life; he must also control our lives”.

Friends of www.savoiretcroire.ca are invited to read these Bible passages each within its own context. It is not required to be a specialist of Bible interpretation to come to the understanding – as one reads the epistle of James, and of Paul to the Galatians – that both apostles insist on the practical application of faith in specific areas of a believer’s life.

Reading the epistle of Paul to the Galatians will also provide an idea of the issues against which Paul was fighting, and the dangers that threatened the Christians to turn away from the centre of their faith: Christ alone, He who accomplished the requirements of the law on our behalf when He died on the Cross.

In brief, apostles James and Paul speak with one voice : true faith manifests itself externally. The relationship between works and faith must be understood in the context that is specific to each of these two epistles and of the remaining of Scriptures.

For more on this same topic, please visit BibleStudyTools.com –> Study –> Video.
You will find short study-videos like the ones below:

You wish to get involved and discuss about life-related subject matters, feel free to join our trilingual Community of dialog about the Christian Faith (French, English, Spanish).