My preceding testimony,  God’s Outworking in my Life, provided a detailed view of some of the major events that drew my attention to God in the first place, and that contributed to make me want to stick with Him throughout the years of my life. The testimony you will read below is simply titled Bird’s Eye View, because, as its name suggests, it provides an overview of the same without entering into specific details. These titles are intended to reflect that both testimonies are complementary of one another. 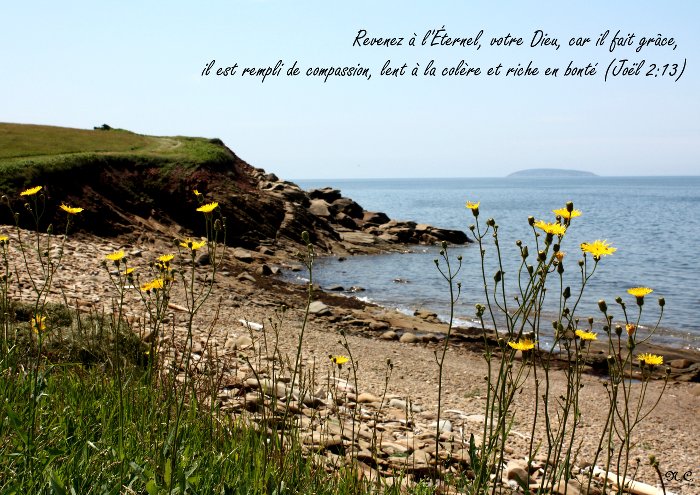 Return to the Lord your God, for he is gracious and merciful (Joel 2.13)

I became a Christian in 1977. I clearly understood that I was leading a life that displeased God, although I had been considering myself as doing no harm to anyone up to that time when I began reading the Bible for myself.

Changing my attitude, ways of thinking, of doing, and of being, required a decision on my part which I was not willing to make at first. I believe today that this refusal on my behalf was what eventually led me to declare myself an agnostic.

But, as a self-declared agnostic I could not explain how a God that does not exist could have answered one of my «If you exist, then you must…» type of prayers which I had made earlier on, when seeking God, and asking Him to reveal Himself to me.

That answered prayer nagged me until such a day I realized agnosticism was not a valid world view, and decided to turn away from the life I had been living, up to then, and to begin living in ways taught by the Word of God.

This led me to become dynamically involved with sharing my faith all around me, up to a point when I joined a «servant in training» program, preparing for what turned out to be a Church Planting pastoral ministry.

I was devastated, when I came to realize – in 1987, after eleven years of training and ministry – that there were issues in my personal life that would not just go away, and that I had to make a choice that involved stepping out of full-time Church leadership, and going back to secular work.

I stayed in the small Church I had been the founding pastor of, but soon realized people kept coming to me with situations that the new pastor was teaching and leading in ways that were sometimes opposite to what I had done. So within the same year that I had left full-time Christian ministry I also felt I needed to move to a different local Church.

From 1988 to 1997 my family and I worshipped and shared about God and His ways in a nondenominational Christian assembly called Assemblée chrétienne la Bonne Nouvelle (Good News). It was a good Church, and it helped us in our spiritual walk. But a situation came up that led our family to join a start-up local Church involving leaders that were from the same denominational background that we were.

So, from 1997 to March 2017, we were involved in a second non denominational group, La communauté chrétienne des Deux-Rives. The name has to do with the premium value this local church lays on the notion of community, and to the fact that its participants are spread out on the North and South shores of the Quebec city area, Quebec, Canada. From that community church we moved on to our current Église vie abondante.

It was not until 2008 that came about a life-changing insight, which I am convinced was from the Holy Spirit of God, and which led me to confess my sin in a specific area of my life I had progressively let myself slip into with the passage of time. As a result of this, and of several other factors that were part of God’s doing, I began to experience a deep and permanent joy I had tasted a little of before, but that had not been my daily lot.

My family, and the people who had known me for years, asked me what had happened. But I could not explain it apart from the above. I do know that even when we are convinced that nothing will ever come of our life again, because it did not turn out as we wanted, God is there doing His work, and leading us to greater knowledge of Him. My article Can Married Couples be Restored is a direct outcomes of this life-changing event.

In light of one of what I am trying to accomplish through www.savoiretcoire.ca, perhaps concentrated on the page titled Autobiography and Learning, and documented more in-depth in my master’s thesis (French only), it might be appropriate to add that the current synthesis is an example of the level of abstraction that one can choose for presenting  autobiographical material, in cases he or she does not wish to provide some of the specific details, yet is determined to stay true to what actually occurred in his or her life.

Please check out www.christianforumsite.com, where a draft of the above testimony was first published as part of my profile. I’d be happy to engage with you there.

Daniel Garneau, B Th, B Com, MA, is founder of site Savoir et croire .ca. His primary objectives are: encouraging Christians who lost hope in their capacity of living for Christ; fostering a better understanding of what Christianity is about; contributing to the dispelling of prejudices against those who openly identify themselves to Jesus-Christ in their daily lives and who dare talk about it; helping to increase the mutual acceptance between various Christian traditions who continue to hold faithfully to the Word of God.
View all posts by Daniel Garneau →
This entry was posted in Christian Testimony and tagged Autobiographical essay, Autobiography and Training, Bible, Knowing God Personally, Love of God, Prayer, Providence of God, Reading, Repenting from sin, Sharing about our Christian Life, Sovereignty of God, Turning away from sin, Word of God. Bookmark the permalink.